What is a Classical Education?

You are here: Home1 / What is a Classical Education?

Classical Christian education is unique in that it seeks to faithfully restore the most proven form of education ever developed. This education produced the greatest thinkers, leaders, and scientists in the Western world from the time of the Greeks until the late 19th century, including America’s founding fathers.

What makes Classical Christian education so effective? First, it is based on what has been called the Trivium. No matter how your child learns, he or she goes through three stages. The first stage is the Grammar stage (grades K-5). Students are geared toward learning and using language. Students are excellent at memorizing. In the Logic Stage (grades 6-8), students become more argument-oriented. They are ready to be taught logic and critical thinking. The Rhetoric Stage coincides with high school. By this time students become independent thinkers and communicators. To this end, Desert Springs Christian Academy prepares our middle school graduates for rhetoric, the art of speaking, communicating, and writing so they will be well prepared for success in high school.

The goal of education at DSCA is to prepare students for a virtuous life. Our curriculum is selected and taught with this goal in mind. Our academic program is built around what we call The Virtuous Core.

Language Arts
We believe facility with language is absolutely essential to life-long learning. We teach grammar, Latin, writing and reading. Teaching our students to use language provides them access to big ideas and skill with language is the primary way to influence others.

Mathematics
The study of mathematics is far more than just numbers and calculations. Mathematics taught from a Classical Christian perspective allows students to grasp the deep order and structure of the universe. They come to understand that human thought is a miracle—a creative design. Mathematics also teaches us to exercise stewardship over the natural world.

Natural Sciences
Students need to know what can be known with our senses. We teach them to be observers. By the same token, students need to learn what cannot be known with our senses. For example, we cannot know exactly how the world came into existence. We can know the power behind it be we can’t know the exact mechanism. The study of science also teaches students to discern how to wisely use natural resources. This leads to an understanding of Christian stewardship of and responsibility for the world.

The Bible
Teachers at Desert Springs Christian Academy believe Sola Scriptura – Scripture alone holds the truth. That is why a Biblical worldview undergirds all academic studies. Beyond that, however, we know that the Bible is a big, complicated book. Bible has to be taught. The classical approach takes a unique perspective not found in most Christian schools. DSCA follows the classical approach to the Bible. First, children need to be taught HOW to read the Bible. We do not over-simplify God’s word with dumbed down language and cute stories. We read the Bible like we read other books. Second, we understand the Bible to be the touchstone of truth. There are some things the Bible doesn’t talk about because it doesn’t have something to say about everything. We look to it for the timeless principles that have guided every generation of believers. Finally, we believe the Bible must be taught as an exercise for discipleship of the mind.

Classical schools maintain order in the classroom. This does not, however, translate into stoic classes where interaction is limited to an occasional, downcast “yes ma’am.” Desert Springs Christian Academy encourages extensive interaction between students and teachers. Students are not allowed to be disruptive, but they are constantly encouraged to offer observations, ask questions, interact, and make comments. Our classroom environment is bright, cheerful and peaceful. The classroom is arranged so as to maximize student involvement with the teacher and fellow students. Classical music, great books, and classical art can be found throughout the school. The classical method at DSCA encourages a stimulating and enjoyable learning environment for students. 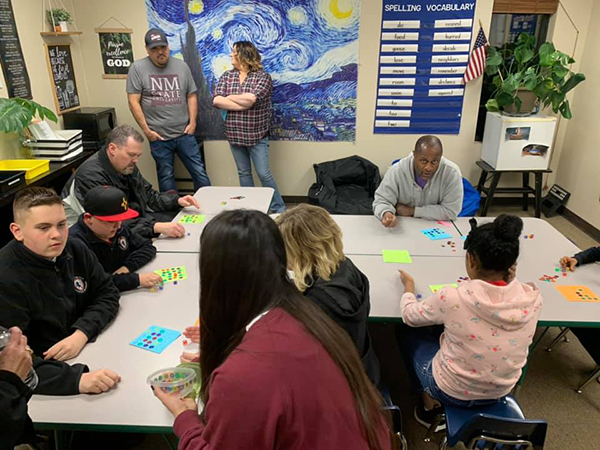 Our Mission & Parent Covenant?
Our Objectives
Our Philosophy
Our Statement of Faith